Heart Breaks are the new beginning !

Heart Breaks are the new beginning !

There are a lot of things in life that you cannot change. Or you do not have control over them. Heartbreaks are such things too. It is up to you how you take it though. You can either sit and cry throughout your life cursing your fortune or you can take your heart breaks as a new beginning.

All of us have gone through heartbreaks. Every individual has their own cope up mechanism. Some of us get through it, while others break down. It is hard to judge anyone regarding this. We all have different levels of emotional feelings. Some take heart breaks as a new beginning. Some let it break them. Others may stay in denial. What is important according to me is not giving up. Do justice to yourself. Maybe it had to happen. It may take a couple of years or more but you will come out of it. Heartbreaks are the new beginning. Take it take way.

I know it is very easy to say than to do. That is why I am here to share my story. My heartbreak and how I came out of it. It is a sad and difficult phase. You feel broken. The key is to trust yourself and self-love. Learn to began something new through it. Let me lead you by my example. A true one. Heartbreaks are my new beginning.

Heartbreak comes when least expected. Things go smoothly for years and suddenly BOOM! It is over. It hurt. Can you imagine how I must have felt at that time? Probably not. You cannot feel something unless you have been through it. This incident broke me to the core. Let us go through the journey.

I was in a relationship for about 6 years nearly. It was a difficult one but I pulled it through. I say “I pulled it through” because efforts were one-sided. Ignorance is bliss, I heard. It is not though. I ignored certain matters for so many years that I landed up in such an ugly phase today. Everything he did, he had excuses or reason for that. I kept keeping it under the carpet just to save the relationship. Cheating, lying, or faking in a relationship is not cool. If you do not feel good, leave. Not when it is too late, but as soon as you feel it.

I was emotionally very much involved with that one person. He helped me survive my previous heartbreak as I was way too sensitive to do it alone. I kept telling him stories and that is how we became companions. It took me time to feel for someone else after my first heartbreak. After about one and a half years, I fell for him. I knew he was uncertain but never thought he will turn out to be a disaster. 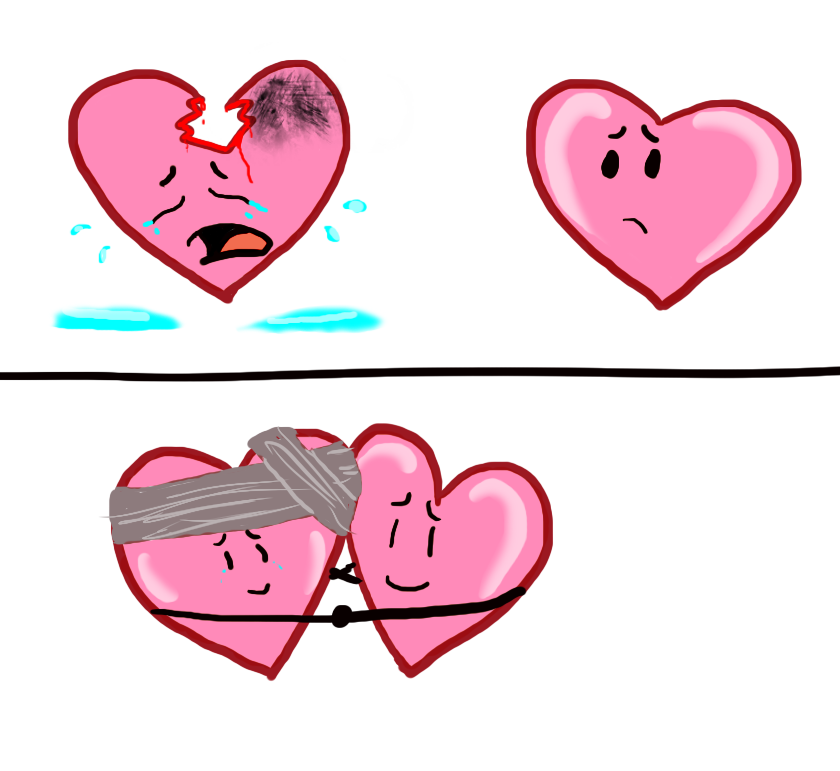 This is my story. I went through a terrible heartbreak. I know it is emotional for me to even write this but I had to. Sometimes hearing someone out helps us be in a better place. There may be certain personal things that I may have to omit keeping in mind the crux of the topic. Focus on the things that I want you guys to learn.  Nonetheless, this heartbreak was no less than a lesson to me. Come let us start…

I was about 17 years old. I guess. We were in school, the 11th class. I recently had changed my school and I did not make many friends in the new school till now. I had two close friends. Girls. That is how I started adjusting to this new school. One of my friends kept telling me about her heartbreak and I could completely understand her. I had gone through one a year before. She shared that her ex cheated on her in front of her eyes in school, and actually never felt bad about it. He then broke up without giving a proper reason. He just left.

She told me he was so charming that no one could ever ignore him.I developed a curiosity to actually meet this person or at least see him. I wanted to see how a disgusting man like him can look. Time flew away and 11th class was about to end. It was the time for farewell. As we were Juniors, we had to plan it for our seniors. One day, my friend introduced me to two of her friends who were guitarists. Slowly and steadily I became friends with them. They asked me If I could sing for farewell. I agreed happily. That was one thing I always wanted to do. Now we needed people for anchoring. I thought why Can’t I give it a try? So our principal had to test us for the same. That is where I met him.

That is how it Began.

He did have that charm that no girl could ignore. With farewell practices and everything, we started mingling more. Things went on and in a couple of months, things moved really fast. He told me that the break-up story with my friend was not exactly what she told me. He told me his side of the story. I believed him. He was so convincing. I started developing feelings for him and we started dating. Physical attraction or what, I did not know. All I knew was that I trusted him and liked spending time with him. Slowly and steadily things went on. He became the head boy of the school and I was the house captain. Things were going well and smoothly. Nevertheless, you do not always see what is true. You tend to see things the way they are shown to you.

Times passed by and things unfolded in front of me. A lot of it actually. After a few months, I started feeling that he was not completely honest with me. I like transparency in a relationship and he did not, clearly. One by one, all his past stories and everything unfolded. He repeated the same thing He did with my friend. This time he did not accept that he was cheating on me though. I can tolerate everything, but cheating? NEVER. It happened. I forgave. We moved on with our relationship.

Ending of the school and new beginning!

As the school was ending, something awful happened and it changed our lives completely. He was taken off from Head boy post. All the members of the student’s union were taken off their duties. Our principle received some horrible blame against all of us. She called me a character-less girl just because someone told me I was caught with him doing something horny. I did not even meet him inside the school campus nicely how could I be blamed for all this, I thought. At that time I could not understand what was happening. I was deeply hurt and could not believe it. All I knew was he was hurt and I need to support him. No matter how he behaved with me or what he did.

All through his bad phase, I stood by him. He never cared though! Soon our school life ended.

For the next couple of years after school ended, he was gone. I did not know where but he called me just once in 2-3 months. It was my happy space. Hearing his voice felt like a bliss itself. I thought he forgot me. Completely. But his calls made me feel good. You will not believe, one call from him made me live happily for about two months. The mere thought that he remembers me gave me strength and happiness. I used to keep calling him and asking him about our relationship. Things changed drastically between us and I knew he was not into me anymore. I just wanted him to tell me if it was over. I could have at least moved on in my life. And not HOPED!!!!

It was my last year of graduation. He called me up in the middle of the night. Something in him changed. He spoke to me for hours and said, he wants to try it with me. Honestly. I thought I waited for him for like two and a half years. Now I should not give up and give him a chance. I did that. He started making efforts, we started meeting, things became better. That was the best year of our relationship. It was like a dream come true.

After a couple of years, his office shifted. So did our relationship. Now he worked in a corporate. I was still in college. Every conversation turned into an argument. Timing issues and the communication gaps increased. Not that otherwise he gave me 100% of his time. He had his final year exams and said that he needs to study hard. Uninstalled WhatsApp, Instagram, and every possible way of communication. I trusted him blindly, all through this. He lied. He was right there. Everywhere. Just away from me.

I remember the day his exams got over, he said he needs some time alone. After a couple of weeks he broke up with me over a text message. I begged him, asked him for a reason. All he did was ignore me. As always. For four months, I kept finding ways to communicate with him. I went outside his classes, asked his friends for help and whatnot. In the end, I went right outside his house with everything he ever gave me. I asked him what was the reason. One line he said, ” I tried but I couldn’t fall in love with you”. Ultimately I realized nothing I would say is going to change the way he feels. It was over now. I gave back his things and came back.

Nevertheless, I never felt so deceived and cheated ever in my life, How can you propose a girl for marriage and bloody leave suddenly? Six years I mentally invested myself into something which was useless. I felt I did not respect myself enough. Waiting for him, trusting everything he said even after my close friends warning me was my mistake. I am sure he was cheating on me for a long time that is why he left. He would never admit that. I kept blaming myself for every mistake he did. This is not fair.

Things I learned from my breakup

Hello people! I am Megha suresh. I am a nutritionist by profession, blogger by hobby! I love both my professions equally.


We aim to provide the most recent and trending news updates to our visitors from across the globe. Through our Blog section we endeavor to cover different domains that touch our lives – Health, Food, Lifestyle, Entertainment, Sports, and Technology. Buzz of the Hour also welcomes writers who wish to put forward their views, share their experience or update any information that requires to be viewed by masses through an eminent platform.